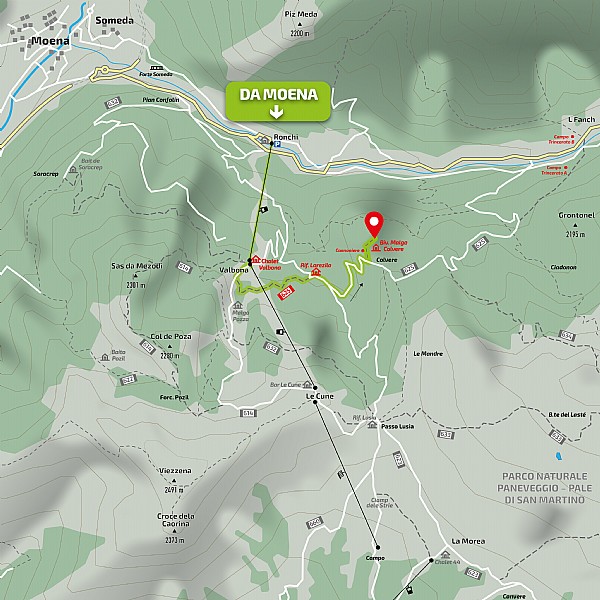 Easy walk of historic interest on the footsteps of the First World War. From Valbona (1820 m) go towards Pozza Alpine Cottage along a short plain route. As soon as the dirt road climbs, take the Nature Path (route n. 625) which goes down on the left. Reach Larezila Refuge (1761 m) and proceed on the right along a short hill until a crossroad. Keep the left and take the route which leads to Colvere (1880 m) with hairpin turns. On the left side, before reaching the cottage, you can see the Austrian cannons located in structures made of reinforced concrete.  A little path full of foxholes crosses the hill and leads to the observatory; a series of galleries with windows and embrasures to keep control of the mountain pass San Pellegrino, where the Italian front begun. We kindly advise you to take an electric torch to pass through the galleries.

The return is along the same path. Alternatively, it is possible to proceed on the route n.625 towards Fango (1643 m), where you can find the remains of a foxhole field, and then walk for 3 km on the forestry route until the parking in Ronchi.

Take the cable car from Ronchi to Valbona (1820 m) where the path starts.

It is also possible to walk to the ski lift station, leaving from the centre of Moena and cross the village of Someda. Along the path, which is approximately 3 km, you can see the old military small fort of Someda.

TIPS: make a stop-over at Larezila Refuge, where Angelo, the owner, welcomes his guests with some interesting tale and spoils them with delicious typical dishes. You will discover also the refuge built in 1905 and designated as military hospital during the war. Nowadays it still keeps some curious remains inside.